return of the money chronicles:
starting to sort my money mystery out, my previous address isn’t listed/recognised so now that my mail is back at a stable address my credit score increased somewhat: 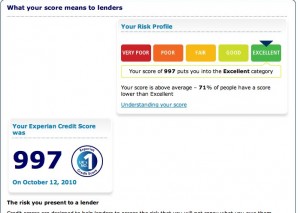 check with royal mail to see whether your address is on their system, if you have problems inputting/finding your address online when buying stuff for example contact them on: addressmaintenance at royalmail.com, they will update their system for you but…

“Our Postcodes on-line service at www.royalmail.com will reflect this within 48 hrs, (excluding weekends & bank holidays) although any correction to our
database could take several months to filter through to end users of Postcode Address File Data. Unfortunately, we have no control over how often external companies update their databases.”

so there you go.

another discovery thanks to the lovely marjorie is this site, it’s loads cheaper than creditexpert and shows all three of the major credit scoring agencies.

gonna wait a few months and see if i can move from my evil bank to a more ethical one, i wonder, and i’m certainly no finance expert, if everyone moved their money from the key players to ethical ones what would happen? my mum moved to an ethical bank this week, so proud! go mummy!

Why do creatives in the community sometimes get paid so little? It has been annoying me of late.

At an interview regarding working in health settings I was offered a rate of pay almost 3 times less than what I normally command. I took a risk and asked my interviewer why the pay was so low. I was given a rather insubstantial response; the organisation received small funds and had to offer sessions to as many people as they could.

Surely having fewer funds means the number of projects you offer are less rather than the wage you distribute? Why does the artist have to suffer? Will the quality of work be the same when you pay an artist so little? Can they dedicate as much time to planning and preparation on such a small fee?

Lack of money was also something that caused tension on a musicleader course I am working towards. Some community musicians seemed insulted by the money they were offered for working in schools. A less obvious issue, but one I felt was present, was that of secrecy; some community musicians appeared quite cagey on disclosing the rates they charge and it baffled me. Why is it that teachers know roughly what their colleagues’ salary is? That a barrister will be in full knowledge of the average (cough- extortionate) hourly rate they can charge, but why is it so impossible for freelance artists to share the figure that they feel are worth?

Whilst doing my part-time stint as a music teacher- I found out my year 9s group could escape their music lesson by watching a really dire theatre production. It was so bad I had to put my hand over my mouth to stop the sounds of me guffawing leak out!

When discussing the terrible acting with other members of staff, one asked why it was so expensive to hire freelancers and theatre companies- and complained about the hourly rate. I rolled up my sleeves and explained the joys and trials of being a self-employed artist and babbled on about CPD, no sick pay, no holiday pay, marketing and promotion costs, being a small business blah de blah, moan, moan, moan.

Apparently, the Musician’s Union and other music organisation cannot suggest a standard fee because they are so contrasting. I also heard rumours that the average fee for community musicians in Birmingham is more than London. On the Birmingham City Council participatory arts course I passed last year they suggest a workshop leader ask for a minimum of £175 for a day and £100 for half a day.

What do you think? Should we have a standard fee for community musicians? What are creatives in the community worth?