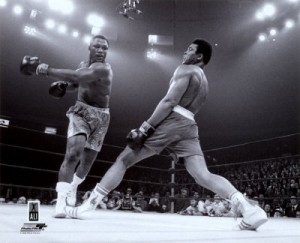 One for the freelancers;  a great blog post by Nathan Hangen about shameless self-promotion. The most memorable bit of advice I’ve taken away is:

Your ideas might inspire hope, thought, or action . . . but as a general rule, good ideas inspire something.”

I also liked his comparison of Mohammed Ali and Mike Tyson; both phenomenal boxers, yet greater disparity in self-promotion, artistic vision. Who’s the most memorable….?

So, this year my aim is to be more Mohammed Ali-esque in self-promotion, my business will benefit from the marketing department being either sacked or given loads of encouragement. I think I’ll do a bit of both, sack the self-adulating half and pep talk the shy part.

“He who is not courageous enough to take risks will accomplish nothing in life.” Mohammed Ali.