It’s a bit late me blogging this, but I have been very snot-ridden and ArtsFest distracted me for most of  yesterday.

I was invited by the Unlit Tour HQ to attend a gig held at Dave’s house, other invitees included Chris Unitt.

Dave (a local nice guy working at the Hare and Hounds) happily offered use of his house, so that singer-songwriter Jont could put on a gig and free party. Jont’s being putting on these type of parties for around 10 years.  However, this bout of Unlit parties are sponsored by a mobile phone service provider (who I recently left)- where for a whole month Jont, Dave, Garfield and co. travel around the UK in a camper van and put on serendipitous events with a lovely community vibe.

We had performances by a folk ‘with a little hint of jazz’ band called the Old School Dance, who were really energetic, interacting well with each other and audience. Poet Tim Clare, who travelled all the way down from Norwich- we had quite a gass about Shambala, and how much he loved it, and how badly it went for me… Chris Unitt has blogged about Tim’s poetic content and has more pics and video footage too!

There was also a guitarist and singer called Bust My Flex, who played blues inspired riffs, with references to Grizzly Bear and Jeff Buckley, and wore his hat down low. He was heckled shed loads by his mates but nonchalant about them trying to upstage him.

I arrived unfashionably early for the party, I was advised by Unlit HQ to arrive for 7.30 p.m- kewl, bed by 10.30 p.m so I thought. The party didn’t start till well after 10p.m so there was a lot of sitting around, laughing, and chatting to Jont, Dave and his film crew- who were all lovely, but really wired from being on the road for a month.

Garfield one of the film guys inquired- “Does anyone have a pill?”

“Whoa!!…. Jesus, they’re hardcore!” I thought – but in fact, he meant paracetamol- as they had been suffering from headaches from partying (boozin’) nonstop, I gathered. One of Jont’s mates- a camera guy from Landon had driven up on his motorcycle in the torrential rain- the weather was nasty- I was sure the outdoor tent was going to cave in and drench us all with rain. Anyway- to my amusement, Rich got very tipsy and was meant to be in charge of live streaming the gig- but you can see the results of lots of JD and coke here.

I’m going on to much here, so I’ll end with saying that I really enjoyed myself, met Jo Geary and FrankieW for the first time which was nice, and hope the rest of the tour is a success for the lads.

(Taken by me on Chris Unitt’s camera) 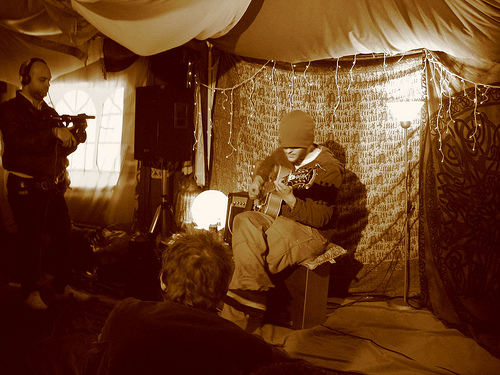 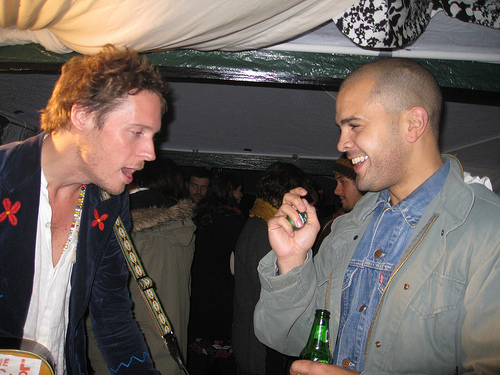